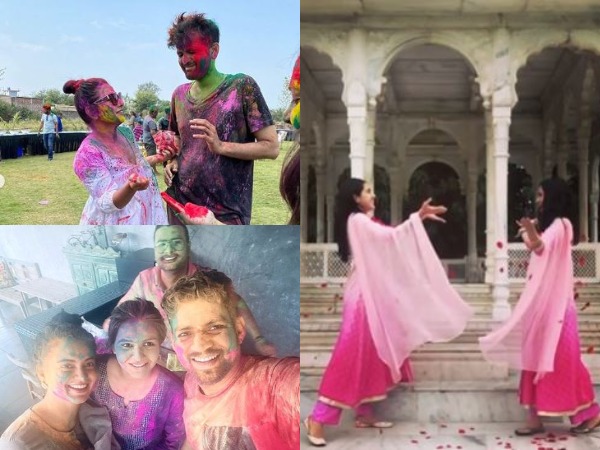 New Delhi [India], Mar 10 (ANI): As the country on Tuesday celebrated the festival of colours -- Holi -- Bollywood's chirpy queen Sara Ali Khan celebrated the festival at Varanasi with flowers.
The Pataudi scion took to Instagram to share a video with a friend in which the duo was seen throwing flower petals on each other.
Wearing a double shaded long kurta suit set in hues of pink with Jaipuri Juttis, 'Love Aaj Kal' actor captioned the picture: "Benaras ki Holi."
Besides Sara, various other Bollywood stars were seen celebrating the festival through their social media posts.
'Manikarnika: The Queen of Jhansi' actor Kangana Ranaut also celebrated the festival with her family.
The actor's team shared a picture of her on Instagram in which she is seen with colours on her face posing with her brothers and soon to be sister-in-law.
"#HappyHoli guys! #KanganaRanaut and her brother Aksht and Fiancee along with Kangana's Rakhi bother, Ajay Dhama, celebrating Holi!" reads the picture caption.
Actor Vidya Balan also celebrated the festival of colours with the cast and crew of her new film 'Sherni.'
Balan shared a series of pictures on Instagram from her Holi celebrations and captioned the post, "Happy Holi to you all...Bura na maano #HOLI hai ...with #TeamSherni."
Other celebrities who celebrated the festival and documented them on their social media include Priyanka Chopra, Riteish Deshmukh, Sanya Malhotra, Lara Bhupati and Kareena Kapoor. (ANI)