Skip to content
Home  »  National   »   As IMCTs arrived without prior consultation, could not provide logistic support: WB Chief Secy to MHA 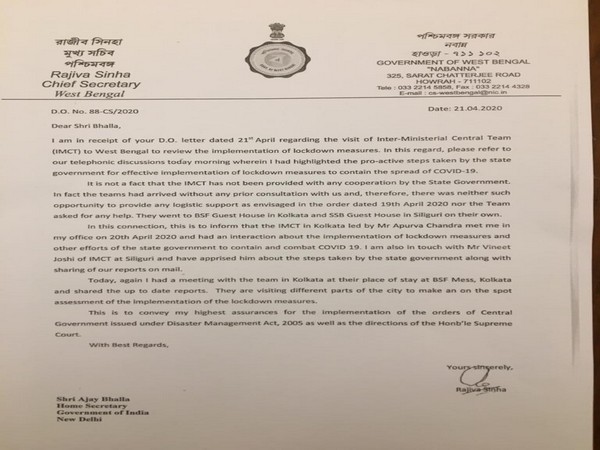 New Delhi [India], April 22 (ANI): West Bengal Chief Secretary Rajiva Sinha has written to Union Home Secretary Ajay Bhalla stating that the Inter-Ministerial Central Team (IMCTs), deputed by the Centre to assess the lockdown situation and compliance in the state, arrived without prior consultation with the state government officials and therefore there was no opportunity to provide them with any logistic support.
"It is not a fact that IMCT has not been provided with any cooperation by the State Government. In fact, teams had arrived without any prior consultation with us and, therefore, there was neither such opportunity to provide any logistic support as envisaged in the order dated 19th April 2020 nor the team asked for any help," Sinha stated in the letter dated April 21.
"They went to BSF Guest House in Kolkata led by Ms Apurva Chandra, met me in my office on 20th April 2020, and had an interaction about the implementation of lockdown measures and other efforts of the state government to contain and combat COVID-19," said Sinha in the letter.
The Chief Secretary further said that he is in touch with the IMCT at Siliguri and has apprised them about the steps taken by the state government.
"Today, again, I had a meeting with the team in Kolkata at their place of stay at BSF Mess, Kolkata and shared the up to date reports. They are visiting different parts of the city to make an on the spot assessment of the implementation of the lockdown measures," read the letter.
"This is to convey my highest assurances for the implementation of the orders of Central Government issued under Disaster Management Act, 2005 as well as the directions of Honb'le Supreme Court," it said.
Earlier, the MHA had said that the IMCTs in West Bengal were not getting support from the state government.
The Union Home Ministry-constituted IMCTs are crucial bodies, which visit coronavirus hotspots for assessment, issue directions to combat the spread of the lethal virus in those areas and submit report to the central government.
Earlier, West Bengal Chief Minister Mamata Banerjee, in a letter to Prime Minister Narendra Modi said that the central teams have kept the state government in 'complete dark'.
She had also asked the Centre to give valid reasons for the deployment of IMCTs. (ANI)