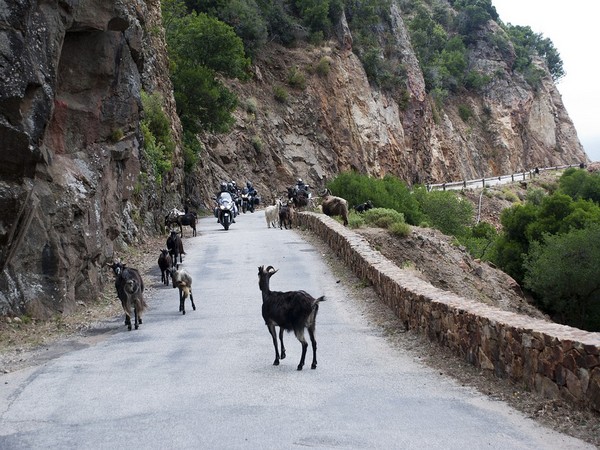 Rio de Janeiro [Brazil], April 16 (ANI): As humans across the world are staying indoors to prevent themselves from catching and spreading the deadly coronavirus, animals are now beginning to thrive.
For centuries, humans have pushed wildlife into smaller corners of the planet, but now, with billions in isolation and city streets empty, nature is pushing back, Terrence McCoy pens down in his article published in The Washington Post.
Beyond the short-term benefits that human quarantines have brought to the animal kingdom, environmental conservationists said that the pandemic could be "an opportunity" to push for more environmental protections and create a safer world for animals, McCoy added.
"The whole world is under risk," Paulista-based environmentalist Herbert Andrade was quoted as saying.
"But this was a moment of happiness. It was a feeling that nature was transforming itself," he added.
Citing further examples of the unimpeded version of nature in recent days, the article stated that one can effortlessly witness hundreds of baby turtles mosey their way toward the water along the northeast coast of Brazil.
Pictures flooded on social media also show wild boar descending onto the streets of Barcelona. Mountain goats have overtaken a town in Wales. Whales are chugging into Mediterranean shipping lanes, while turtles are finally getting some peace.
"The goats absolutely love it," Andrew Stuart, a resident of Llandudno, Wales, told the Post after he saw the animals stroll into the town one recent night. He said they have "munched on windowsill flowers, convened in parking lots and strutted down emptied streets."
"They keep coming back, multiple times per day, 10 to 15 of them," he said, adding, "they're taking the town back. It's now theirs. Nothing is stopping them."
A growing body of research, cited by the newspaper, has suggested that the risk of emerging diseases, three-quarters of which come from animals, is exacerbated by deforestation, hunting and the global wildlife trade, particularly in exotic or endangered species.
One of the major vehicles for the transmission of novel diseases from animals to humans are wildlife markets, in which exotic animals are kept in cramped and unsanitary conditions. They have been linked to both severe acute respiratory syndrome (SARS) and COVID-19, the disease caused by the new coronavirus, a rapid spreading contagion that has infected more than two million people across the world and killed thousands of others.
The pandemic has now created pressure on countries around the world to act and take the extraordinary step of banning the consumption of wild animals. China, whose insatiable demand for animal parts drives much of the global wildlife trade, has banned the killing of dogs, while Vietnam followed suit.
A World Wildlife Fund survey of 5,000 people in Hong Kong and South-East Asia found that 90 per cent supported government closures of unregulated wildlife markets.
"Humans are extraordinarily selfish," said Vanda Felbab-Brown, a Brookings Institution scholar who studies wildlife trafficking.
"If they start dying, they will start taking actions to minimise their dying. The most impactful and consequential legislation always comes after the health risks," the Post quoted him further.
The impacts of the closures and crackdowns, if they persist, will be global, undercutting the demand that fuels illegal wildlife trafficking, an illicit trade valued at more than USD 23 billion annually, McCoy wrote in the article.
But analysts, at the same time, opined that the pandemic can further heighten potential dangers for animals. Poverty and hunger, exacerbated by lockdowns and disruptions in food supplies, may drive more people to hunt, the article read.
In adverse scenarios, advocates fear, it is possible that people could abandon their pets, out of the mistaken fear they can spread the virus, or because they can no longer afford to feed them, the writer said. (ANI)