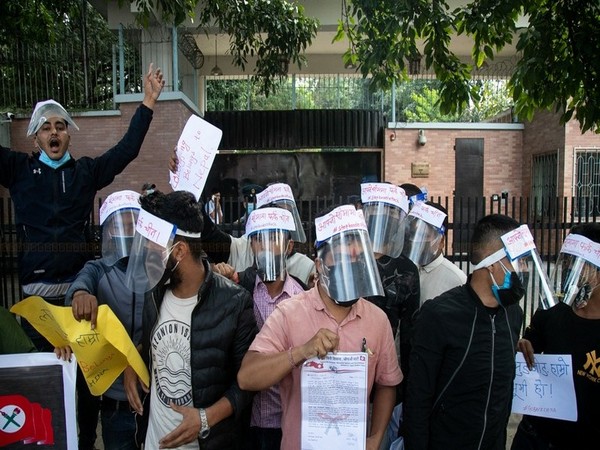 Kathmandu [Nepal], September 28 (ANI): Members of the Nepal Students union on Monday held a protest in front of the Chinese embassy in Kathmandu over Chinese construction in the northern Nepal district of Humla.
Protestors were seen wearing masks and shields in keeping with Covid-19 restrictions and these masks and shields had slogans condemning the construction by the Chinese authorities in the Humla district.
[{f6c6cc44-f76f-45ab-ad6a-095b540e956e:intradmin/ed44ef6a-fdec-40e9-9765-58a2603a02a6_RLrQwz0.jpg}]
The protestors were seen carrying posters with slogans that said that the encroached area by the Chinese belonged to Nepal.
"Return back to your own boundary, China!" read one of the banners carried by the protestors.
Nepali Congress slammed the government for making comments over the issue of land encroachment by China before a team of government officials visited the area and filed a field report on the developments.
Issuing a press release on Thursday, the opposition criticized the government for not waiting for the field report from the concerned Chief District Officer of Humla who had been to the site for 3 days.
"Before the field report about whether there has been an encroachment (by the Chinese) or not, the announcement was made by the Ministry of Foreign Affairs that "there has been no encroachment by China," Nepali Congress said in a statement.
Nepal's Ministry of Foreign Affairs on Wednesday evening had denied reports of land encroachment by China in the Humla district of Nepal in contrary to claims made by locals of the district.
"The Department of Survey, Government of Nepal, based on the official records, reports of the joint field inspection and boundary maps, has verified and confirmed that the said buildings are not located within the Nepali territory," MoFA said in the release where it has mentioned its attention has been drawn over the issue.
The release from the Ministry further claimed that the same sort of issue was raised in 2016 which turned down the earlier claims.
Local media and since last week been carrying reports of land encroachment by China, which had illegally constructing 9 buildings in the Lapcha Bagar area of Humla District which is only accessible by the airway. (ANI)