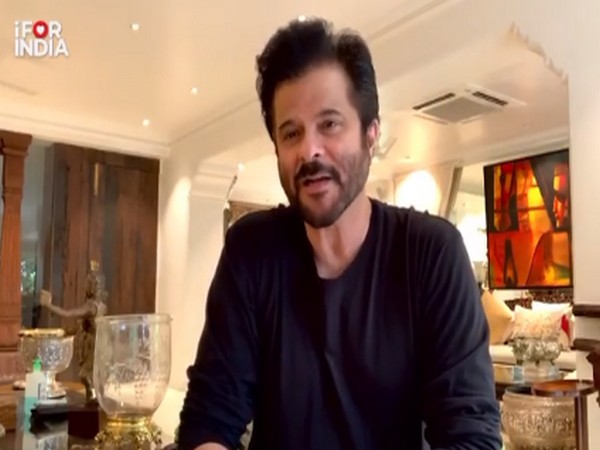 New Delhi [India], May 5 (ANI): Two days after he joined the online fundraising concert 'I For India,' actor Anil Kapoor on Tuesday posted the video of his performance from the show and urged people to donate for COVID-19 relief.
Kapoor who is well known for his famous sci-fi film 'Mr India' started the show by urging everyone to become Mr India and stay inside their homes.
"Ab waqt aagya hai ki India mei har koi Mr, India bane, super hero bane. Lockdown ke vajah se aap log baahar vaalo ko nazar nahi aa rahe, yaani aap already Mr India bane hue ho (It is time that everyone becomes a Mr India. Due to lockdown, you people are already invisible to the outside world, you have already become a Mr India)," he said.
He then spoke about the less fortunate ones like the daily wage workers who are away from their families and are in dire need of resources to sustain and urged people to donate for such people.
"Lekin unka kya jo apne ghar door hai apno se door hai jo chaahte hue bhi kaam par nahi jaa skte.. unke lie aap ek kaam kr skte hain, ek nek kaam (But what about them who are far away from their homes and can't go to work even if they wish to? you can do one thing for them, you can do one noble deed)," he said.
"Its time to say I can, I will, I must help. Press the donate button and do your bit for India, I for India," he added.
In the caption of the post, the 63-year-old actor thanked all the viewers who contributed to the fund by donating and urged others to watch the video and donate.
"Huge shout out to all of you, for your generosity! Please let's continue supporting the war against Covid-19. If you missed the concert, watch it now, link in bio. Click on the video to donate," he wrote.
"100% of proceeds go to the India COVID Response Fund by @give_india
#IforIndia #SocialForGood," the caption further read.
The virtual concert that was streamed live on Facebook on Sunday has already raised Rs 52 crores for the coronavirus relief.
The virtual concert was organised by directors Karan Johar and Zoya Akhtar and it featured over 85 artistes from Bollywood and other entertainment industries.
Those who viewed the event were asked to donate to Give India funds.
Stars like Shah Rukh Khan, Kareena Kapoor Khan, Alia Bhatt, AR Rahman, Arijit Singh, Anushka Sharma, Jonas brothers, Bryan Adams, and many more joined the concert for the noble cause. (ANI)