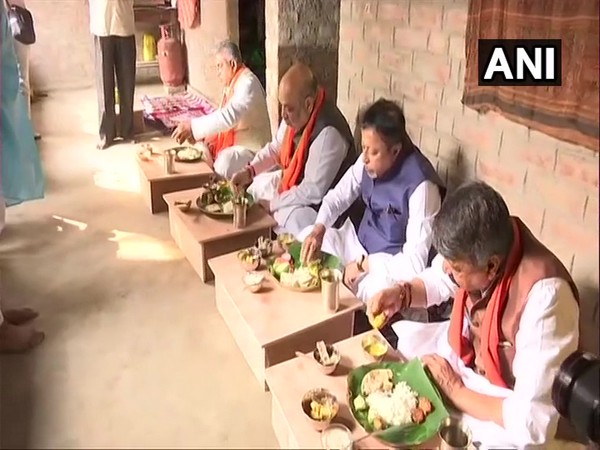 South 24 Paraganas (West Bengal) [India], February 18 (ANI): During his visit to poll-bound West Bengal on Thursday, Union Home Minister Amit Shah had lunch at the residence of a migrant family from Bangladesh in Narayanpur village here.
Senior Bharatiya Janata Party (BJP) leaders Mukul Roy, Kailash Vijayvargiya and Dilip Ghosh also had lunch along with Shah at the migrant family's home.
Earlier on Thursday, Shah flagged off BJP's fifth Poribortan Yatra in Kakdwip of South 24 Parganas district.
Speaking at the event, the home minister said, "This is BJP's fight to make Bengal 'Sonar Bangla'. This fight is between our booth workers and the syndicate of Trinamool Congress (TMC)."
Shah said if BJP comes to power in the state, the government will provide more than 33 per cent of the reservation to women in West Bengal.
"It is not our aim to only bring BJP government after removing Mamata Banerjee's government. Our goal is to ensure that there is a change in the situation in West Bengal, a change in the situation of the poor of the state, a change in the situation of women of the state," he stated.
Shah also held a roadshow in Namkhana here.
The tenure of the TMC government led by Chief Minister Mamata Banerjee in West Bengal will come to an end on May 30, 2021.
Elections for 294 Assembly seats in West Bengal are likely to take place in April-May this year. (ANI)