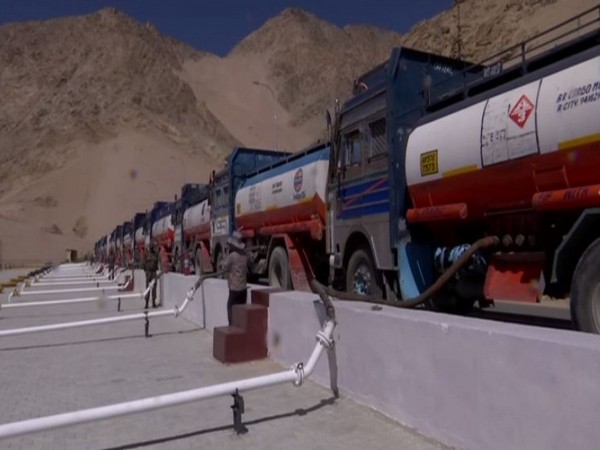 By Ankur Sharma
Leh (Ladakh) [India], September 16 (ANI): Amid the tensions along the Line of Actual Control (LAC) in Ladakh, the Indian Army has stocked up the oil depots in Leh, Ladakh to supply fuel to the Indian Army troops and protect them from the biting cold ahead of the winter season.
"Several depots have been stocked up for the coming winters. We send our supplies for the forward troops. This fuel oil lubricant depot is the largest and highest depot. The fuel sent from here is used to keep the troops warm in cold weather conditions," Brigadier Rakesh Manocha told ANI.
Meanwhile, the Indian Army on Tuesday said it is fully ready for deployment in the harsh winter months as it has stocked up all essential supplies including food items, clothing and fuel.
The Indian Army is fully ready and every jawan is getting best clothing, tents, food etc, said Maj Gen Arvind Kapoor, Chief of Staff, 14 Corps.
"Our logistic infrastructure is so smartly built that any formation coming from outside, in Plug and Play mode, can join the units here seamlessly and be effective. Today, each jawan deputed at the frontline has state of the art winter clothing and tentage," Maj Gen Kapoor said in Ladakh.
"Each officer, JCO, jawan is given the best quality ration which is highly nutritional and high calorific value. Today, the troops deputed in Eastern Ladakh have positively impacted the local economy here," he added.
Brigadier AS Rathore said Indian Army procures high-quality ration to provide high protein to soldiers who are deployed in high altitude.
"I also would like to inform you that the scale of this ration is the same for every soldier irrespective their ranks. Also, we have received and stock all the ration that is required for the force deployed here in Ladakh," he said.
Multiple rounds of talks have also failed to yield any significant result in defusing the tensions and now the Indian side has prepared itself for long term deployment in the high mountainous region. (ANI)