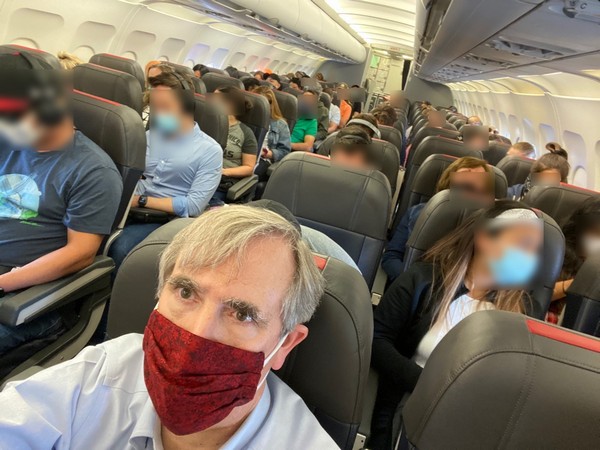 Washington [US], July 9 (ANI): As per the latest update by the Johns Hopkins University, a total of 3,055,004 people in the US have tested positive for coronavirus and 132,309 deaths have been reported so far. However, several US airline continues to violate the social distancing norms by booking flights to full capacity.
Recently, Senator Jeff Merkley revealed American Airlines of violating social distancing norms by booking flights to capacity.
"@AmericanAir: how many Americans will die because you fill middle seats, with your customers shoulder to shoulder, hour after hour. This is incredibly irresponsible. People eat and drink on planes and must take off masks to do so. No way you aren't facilitating spread of COVID infections," Merkley tweeted.
"They're breathing inches from your own nose and mouth, they're taking off their mask to eat or to drink," he was quoted as saying to The Washington Post. "It feels like a pretty high-risk situation."
His tweets drew criticisms against the airlines violating the social distancing norms. Several Twitter users even questioned why members of the government like Merkley could not take any action in the matter.
Later in a tweet, the Senator said, "A lot of folks reacted to my tweet yesterday about the irresponsible sale of middle seats on planes saying, "Wouldn't it be nice if someone in the Senate did something about it? "
"I will introduce a Bill to ban the sale of middle seats through this pandemic. And I'll work with colleagues to include it in a package of airline accountability reforms they are crafting," he added.
Responding to his tweets, the airlines was quoted as saying, "We have multiple layers of protection in place for those who fly with us, including required face coverings, enhanced cleaning procedures, and a pre-flight COVID-19 symptom checklist -- and we're providing additional flexibility for customers to change their travel plans, as well."
On the issue of lack of social distancing in the planes, Katherine Estep, group's communications director, informed The Washington Post that the US airlines are notifying passengers if social distancing won't be feasible on their flight.
Besides American Airlines, United Airlines is another company, which has preferred not to follow social distancing seating.
This revelation comes despite the Transport Department's Runway to Recovery plan, stating that "airlines should consider the feasibility of limiting seat availability to enable passengers to maintain social distance from each other during the flight," because "maximum risk reduction results from maintaining a social distance of six feet between passengers."
Speaking on action that can be taken against such violators, Merkley opined, "The money that's already been lent out to airlines may be under a contractual form that is hard to modify, but I'm sure there are other strategies, other incentives or penalties that might be possible if the airlines choose to [book full flights]."
"It is going to be public attention and outcry that is going to have a huge factor, both on members of Congress ... and upon the companies thinking about their reputation and their customer relationships," he added. (ANI)