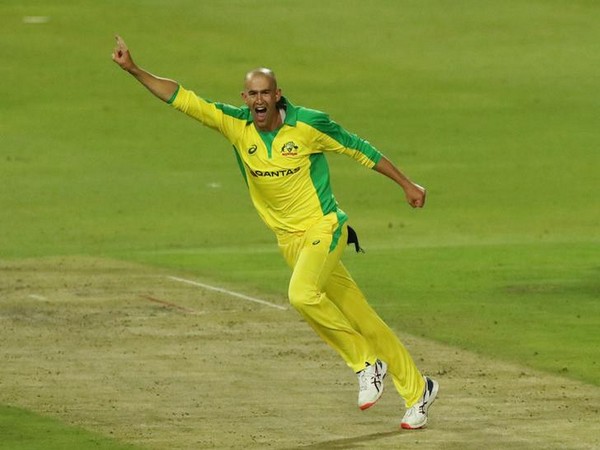 Johannesburg [South Africa], Feb 22 (ANI): Spinner Ashton Agar took a five-wicket haul as Australia defeated South Africa by 107 runs in the first T20I of the three-match series on Friday (local time) here at the Wanderers Stadium.
In the match, Agar also took a hat-trick and became just the second Australian to achieve the feat in the shortest format of the game.
Chasing 197, South Africa lost its first four wickets with just 40 runs on the board. Quinton de Kock (2), Rassie van der Dussen (6), JJ Smuts (7) and David Miller (2) all failed to leave a mark.
In the eighth over, Agar spun a web around Faf du Plessis (24), Andile Phehlukwayo (0) and Dale Steyn (0) on successive deliveries to register a hat-trick and Proteas were reeling at 44/7.
Kagiso Rabada managed to hit a few boundaries, but South Africa was bowled out in the 15th over for their lowest ever T20I score (89), handing Australia a massive 107-run win.
Earlier, Steve Smith's and Aaron Finch's knock of 45 and 42 respectively enabled Australia to post 196/6 in the allotted twenty overs.
Australia got off to a bad start as the side lost its opener David Warner (4) in the very first over of the innings.
Finch and Smith then got together to put on 80 runs for the second wicket. The duo managed to keep up the run-rate of ten per over. Their stint was finally broken in the ninth over as Finch (42) was sent back to the pavilion by Tabraiz Shamsi.
Matthew Wade (18), Mitchell Marsh (19), Alex Carey (27) and Ashton Agar (20*) all played cameos in the end, and as a result, Australia's score went past the 190-run mark.
Brief Scores: Australia 196/6 (Steve Smith 45, Aaron Finch 42, Dale Steyn 2-31) defeat South Africa 89/10 (Faf du Plessis 24, Kagiso Rabada 22, Ashton Agar 5-24) by 107 runs. (ANI)

Gulabi Gang to be formed in Indore next month