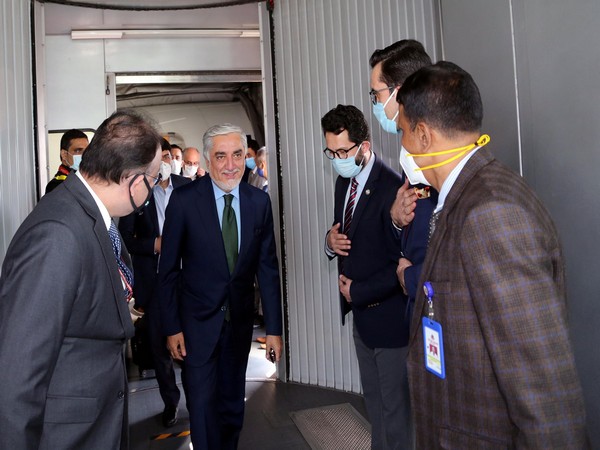 New Delhi [India], October 6 (ANI): Abdullah Abdullah, the chief negotiator with Taliban in the intra-Afghan peace dialogue on Tuesday arrived in New Delhi for a five-day visit during which he is scheduled to meet with Prime Minister Narendra Modi, external affairs minister S Jaishankar, and National Security Advisor Ajit Doval.
Abdullah, the Chairman of the High Council for National Reconciliation (HCNR) in Afghanistan is here to exchange views on the negotiations between the Afghanistan government and the Taliban at Doha, Qatar and bilateral relations.
"Arrived in New Delhi, India, to begin my official visit. During my stay in New Delhi, I will meet the leadership of India, and exchange views on Afghan Peace Process, and bilateral relations," Abdullah Abdullah wrote in a tweet.
Abdullah, accompanied by a high-level delegation, is here on an invitation by the Government of India to discuss the peace efforts and the need for regional consensus and support for the Afghan peace process.
During this visit, he is also scheduled to deliver a keynote speech at the Institute for Defence Studies & Analyses (IDSA) in the national capital.
Prior to his departure to India , Abdullah had said: "India is a strategic partner of AFG and has continuously supported the government and people of AFG. Our historical relations with India is very important to us, and the role of India in establishing lasting peace in AFG and the region is vital. I am visiting India up on an official invitation by the Gov. of #India to discuss the peace efforts, and the need for regional consensus & support for the #AfghanPeaceProcess."
This is the first visit of Abdullah to India after the formation of a new government in Afghanistan.
His visit comes at a time when the Afghanistan government and Taliban are trying to negotiate a deal in order to restore peace in the country. Abdullah Abdullah had last week visited Pakistan and discussed the Afghan peace process with Pakistani Prime Minister Imran Khan, Shah Mahmood Qureshi, Foreign Minister, and other Pakistani officials.
The peace talks between the Afghanistan government and the Taliban began on September 12 in Qatar's capital Doha to end decades of war in which tens of thousands have been killed.
Violence, however, has not abated in the country even as Afghan negotiators have been engaged in direct talks for the first time.
External Affairs Minister S Jaishankar had participated in the opening ceremony of Afghan peace negotiations in Doha through video conferencing and reiterated that the peace process should be Afghan-led and ensure the interests of minorities and women.
He said that Afghan soil should never be used for carrying out anti-India activities and supported the need for an immediate ceasefire in order to establish long-lasting peace in Afghanistan.
On September 25, Jaishankar had met former Afghan Vice President Abdul Rashid Dostum and said India remains fully committed to an Afghan-led, Afghan-owned, and Afghan-controlled peace process. (ANI)