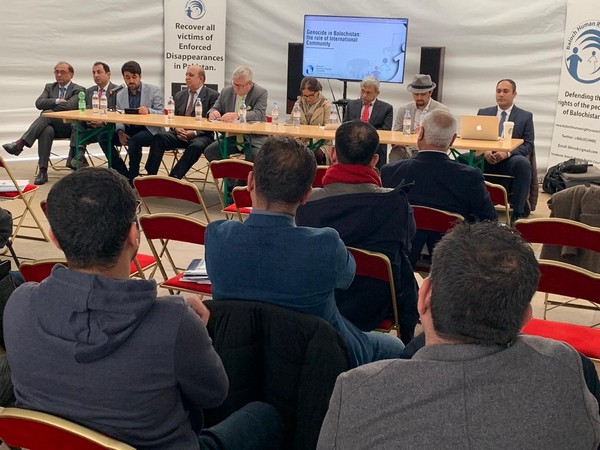 Geneva [Switzerland], Mar 12 (ANI): Political activists, experts and European parliamentarians here discussed deplorable conditions of people in Balochistan on Wednesday (local time).
The 'Save The Baloch' campaign has been launched by the Baloch Human Rights Council (BHRC) where the participants discuss human rights abuse in Balochistan at a conference titled "Genocide in Balochistan: the role of the international community".
The Baloch political activists highlighted the atrocities committed by the Pakistan Army as they have launched operations in Balochistan, killing civilians and destroying their houses.
Razzak Baloch, organiser, USA Chapter of Baloch Human Rights Council, said, "Every 10 miles there is a check post, Balochistan has become a bigger jail. People cannot move around. You cannot even question them as to why you are stopping us? Why are you searching for our bodies? Why are you searching for our women? Why are you searching for our children?"
"Life is very miserable. You cannot move around in Balochistan. Anybody talks and he's vanished. Is this freedom? We want to be free. We want to breathe freely. It is the duty of our neighbours also to see what is going on in Balochistan," he added.
Taha Siddiqui, a Pakistani journalist, who is now living in exile, said, "In Balochistan, currently the biggest issue is that for a very long time there was abuse. There was a lot of atrocities by the Pakistani state, but now it is not just about these missing persons actually. What is the problem is that there are missing stories, there is an information black hole and things are not being reported independently or not even reported at all."
He added, "So, the worst thing that is going on in Balochistan is that we do not even have an idea of what is going on and that is worse than being able to report about it and talk about it. So in that sense, the way there are secret military operations going on, the abduction is going on, there is religious radicalisation going on and all of this is not being reported."
Taha, who escaped his abduction in Pakistan by secret agencies told ANI, "The media is not being allowed and we are seeing that this is intensifying ever since China has come into the equation."
He said that ever since China has invested in Balochistan, "the crackdown by the military and Pakistani state has worsened and they do not want to talk about Baloch issues, the human rights abuse or whatever is happening in Balochistan."
"Nothing negative can be reported from the country because China does not want it, so the Pakistan military does not want it," the Pakistani journalist added.
The event was also attended by a member of the European Parliament who talked about the persecution of people in the mineral-rich but the poorest province in Pakistan.
Ryszard Czarnecki, a Member of European Parliament (MEP) told ANI, "You have a very active (Baloch) diaspora, especially in Europe. Representatives of this diaspora inform us, the members of European Parliament about the real situation in Balochistan and about Pakistani violations and lack of respecting human rights in this region."
"Obviously, we should make an intervention at different international levels. The people in Balochistan should feel that they are not alone. I would like to express my solidarity with our brothers and sisters in this region," the MEP said. (ANI)