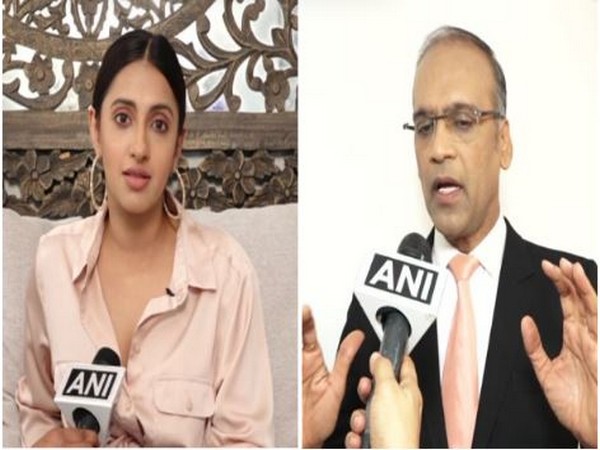 Mumbai (Maharashtra) [India], Mar 17 (ANI): The suspension of shooting by the film bodies in the wake of coronavirus outbreak will have a huge impact on the industry, but at the end, safety is the first priority, said actor Aakansha Ranjan Kapoor and critic Komal Nahta on Tuesday.
When asked on how the Bollywood industry has been affected due to the coronavirus outbreak, actor Aakansha Ranjan Kapoor said: "Not just Bollywood, every industry has shut down, offices are shut .. in the end, it is people's health and we all need to be very careful. The first time we are seeing something like this where the world has come to a standstill. Hopefully, it blows over and everyone stays safe."
Being an actor, the 25-year-old needs to do a lot of travelling across the world and city to city but, due to the pandemic, travelling is not a choice that the actor would make.
"Travelling needs to be stopped. People are not going to even a gym. We need to think smart, more considerate because in case god forbid, somebody decided to go on a shoot and does something .. contracts it around.. nothing is worth that," she said.
Kapoor also pitched for adhering to the basic precautionary measures like wearing masks and gloves, sanitizing and also avoiding public spaces as much as possible.
"But please don't stock up, it is making other people have a scarcity of things that they need. Also, if in doubt, go and get checked," she concluded.
"The outbreak is going to be a major matter of concern for daily wage workers. Sitting at home for 15 days is a big thing," Komal Nahta told ANI.
One of the major concerns following the postponing of the shooting dates, according to Nahta, would be to get dates again for the entire unit together.
"After much consideration, the dates of the actors and the cast are connected, since the shooting has been delayed, it will be difficult to match up the dates with the crew. It is difficult to get combination dates."
He also stated that since the scheduled dates of release have been shuffled, to release the movie after missing out on some Fridays would be a hassle.
Talking about the situation, he further said "It is going to be problematic after all, but cannot help the condition prevailing. Health and safety will be and should be kept as the priority by the government or any other industry."
Taking an analysis of the losses in the entertainment industry, Nahta said: "If we consider the loss happening because of the halt of the shooting and also the box office collection, there should almost 750-800 crores of loss, of which 200-250 crores can come back when the films get released later."
They will bring box-office collection but the rest of the amount that is being lost due to the delay of the shoot, and release is a "dead loss", he said.
"Whenever the industry decides to come back in full form, there is a need to call for a meeting with top filmmakers and decide how to minimize the losses. Here egos, personal gains and benefits have to be sacrificed and the total picture in a big collective manner needs to be looked at."
"Unless this won't happen, this is going to be a great loss for the industry," he concluded. (ANI)