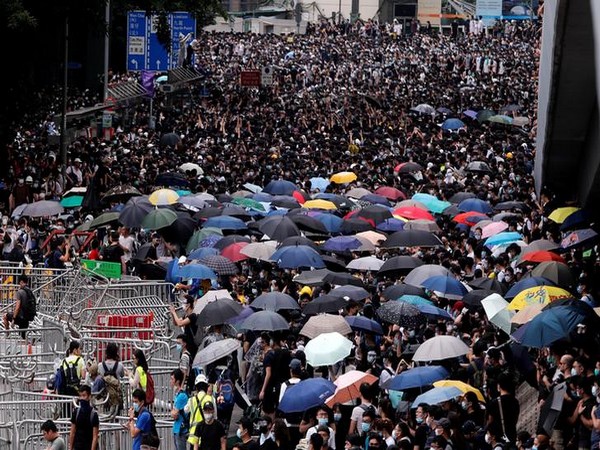 Hong Kong, June 15 (ANI): Thousands of people in Hong Kong mourned the death of protestor "raincoat man" on Monday, a year after he fell from height in Admiralty ahead of a march against the now-withdrawn extradition bill, reported South China Morning Post (SCMP).
Massive protests had taken place in Hong Kong against the bill which was later withdrawn. The bill would have allowed criminal suspects in the city to be sent to mainland China for trial.
On Monday, a shrine was built around a yellow raincoat outside Pacific Place mall, as thousands placed white flowers and placards in memory of 37-year-old Leung Ling-kit, according to SCMP.
A shrine on the poster read -- 'Only the forgotten are truly dead'.
This comes even as China is pushing ahead with its plan to implement national security law, which many believe would erode the autonomy and freedoms enjoyed by Hong Kong.
Leung was seen standing on top of scaffolding outside the mall last June, donning a yellow raincoat. He died after falling from the scaffolding on June 15, a day before the historic mass protest that was attended by an estimated two million people.
Hundreds of people, mostly in black, formed a queue outside the mall to pay tribute to Leung, reported SCMP, with several of the mourners wearing white ribbons in support of plan to go on strike against the controversial security law. (ANI)