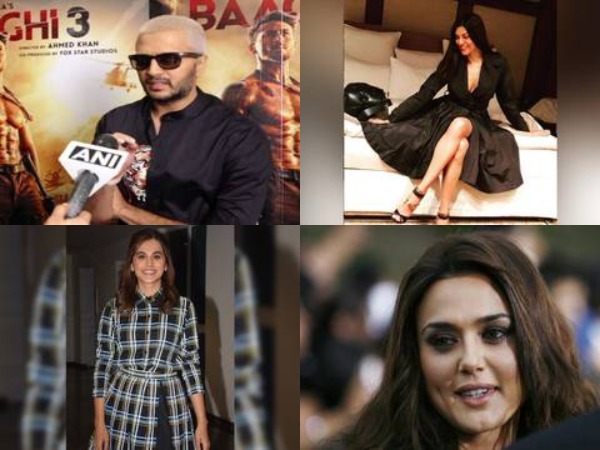 New Delhi [India] Mar 20 (ANI): As the four death row convicts of the 2012 Delhi Nirbhaya gang-rape case were hanged at Tihar Jail on Friday morning, several Bollywood celebrities including Rishi Kapoor, Riteish Deshmukh, Taapsee Pannu, and many more welcomed the execution.
Actor Riteish Deshmukh took to Twitter minutes after the execution and expressed solidarity with the parents of Nirbhaya.
"#JusticeForNirbhaya My thoughts and prayers are with the parents, friends & loved ones of Nirbhaya. The wait has been long but the justice has been served," tweeted Deshmukh.
He also took the moment to call out the need for stricter law enforcement for such heinous crimes.
"Stricter law enforcement, harsher punishment & fast courts for quick justice is the only way to instil fear in monsters who even think of such heinous acts. #JusticeForNirbhaya," Deshmukhs's tweet read.
Actor Preity Zinta also hopped on to the medium and said that there is a need for reform in Indian judicial system for faster judgements.
"Finally the #Nirbhayacase comes to an end. I wish it would have been faster but I'm happy it's over. Finally she & her parents are in peace. #RIPJyoti #RIPNirbhaya #Justicedelayed #TookTooLong," said Preity.
Preity also said that many such crimes against women would have stopped if the rapists were hung back in 2012.
"If #Nirbhaya rapists were hung in 2012 the judicial system would have stopped so much crime against women. Fear of the law would have kept the lawless in check," read another tweet from the actor.
"Prevention is always better than cure. It's time the Indian govt. takes steps for judicial reforms," Preity added.
Former Miss Universe and actor Sushmita Sen also lauded the resilience of Nirbhaya's mother all through the course of justice.
"A Mother's resilience, Asha Devi sees it through!! Finally some justice!! #Nirbhaya Dugga Dugga," tweeted Sen.
Actor Taapsee Pannu tweeted, " It's done. Finally. I hope the parents can finally sleep slightly better tonight after YEARS. It's been a long long battle for them. Asha Devi."
Veteran actor Rishi Kapoor also reacted to the execution of convicts and shamed those who delayed it.
"Nirbhaya Justice. "Jaisi karni waisi bharni" Let this set an example not only in India but world over. Punishment for rape is by death. You have to respect womanhood. Shame on the people who delayed the execution. Jai Hind!" he tweeted.
The four convicts, along with two others including Ram Singh and a juvenile, had raped and brutally tortured a 23-year-old paramedic student on a moving bus in south Delhi on the night of December 16, 2012. The victim died a few days later after battling for life at Delhi's Safdarjung Hospital and later at a Singapore hospital.
The case had created an uproar across the country, especially in Delhi where a large number of people came out on the streets, demanding justice for the victim, who was renamed as 'Nirbhaya' or the fearless. (ANI)