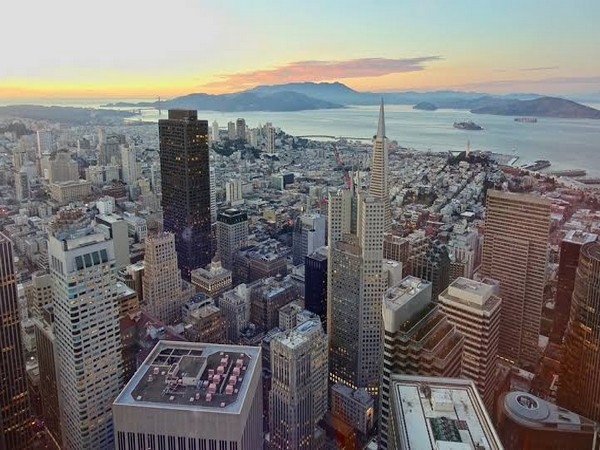 Washington D.C [USA], Oct 5 (ANI): Are you planning a family vacation to San Francisco but don't know what to include in your bucket list and whatnot? There is no better way to spend your holiday than relaxing and chilling out surrounded by twinkling lights of San Francisco. Although the city is big in terms of attractions and amenities, geographically it is small.
Here is a suggested list of the top 15 jaw-dropping places that you just cannot afford to miss while on your break.
Walk Over the Golden Gate Bridge
The Golden Gate Bridge is the one of most famous landmarks in the world that manages to impress even the most experienced travellers with its stunning 1.7-mile span. Some people capture the bridge like paparazzi trailing a film star, trying to click pictures from all possible and even impossible angles. A pedestrian walkway also allows crossing on foot, and bikes are allowed on the western side. 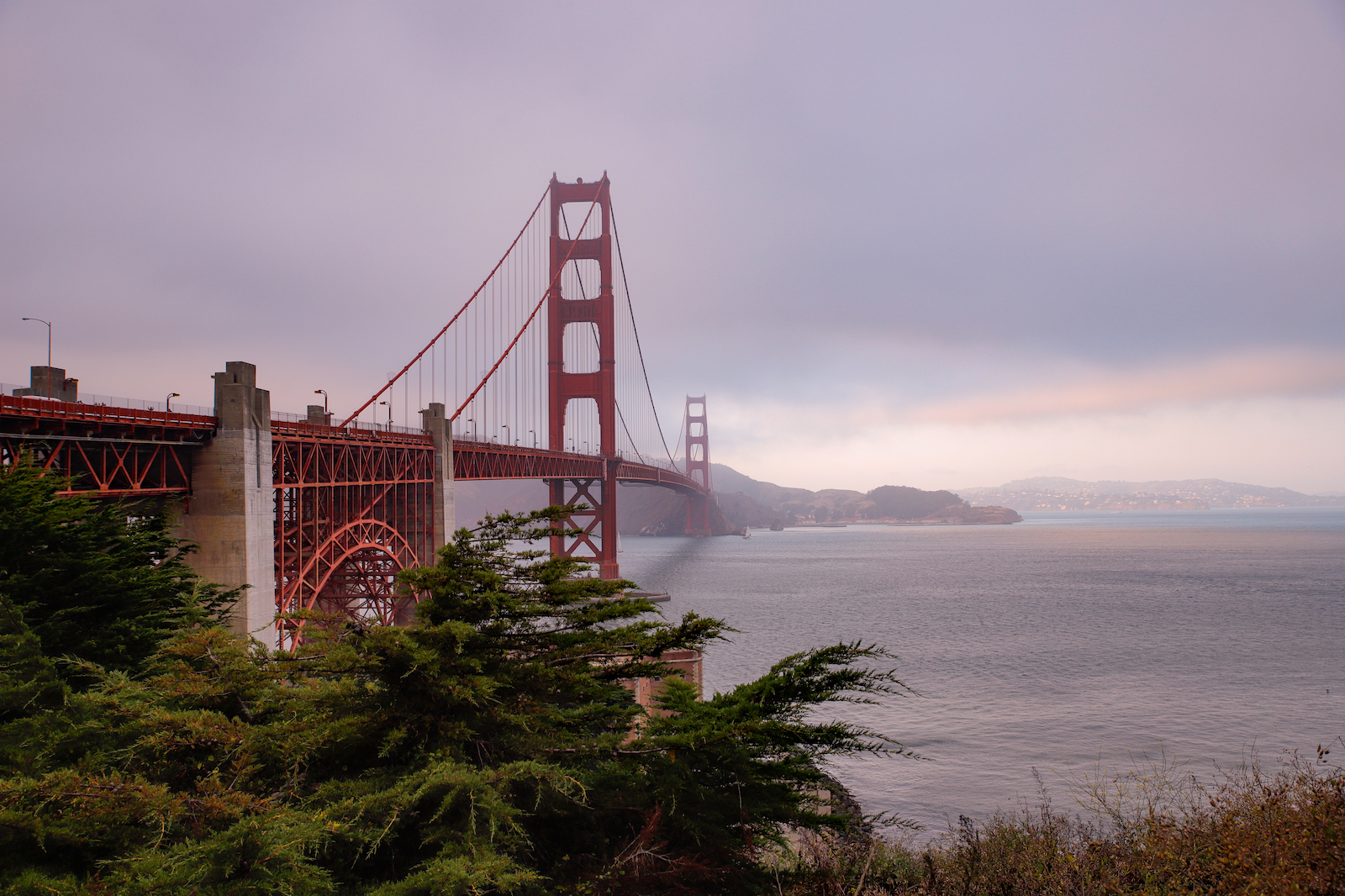 Ride a Cable Car
Another major attraction for the tourist is cable cars which have been transporting people around San Francisco since the late 19th century. The cars run on tracks and are moved by an underground cable along three routes. Their familiar bells can be heard ringing from blocks away. Each one-way ride will provide spectacular views of the city's celebrated hills, as well as an exhilarating ride. 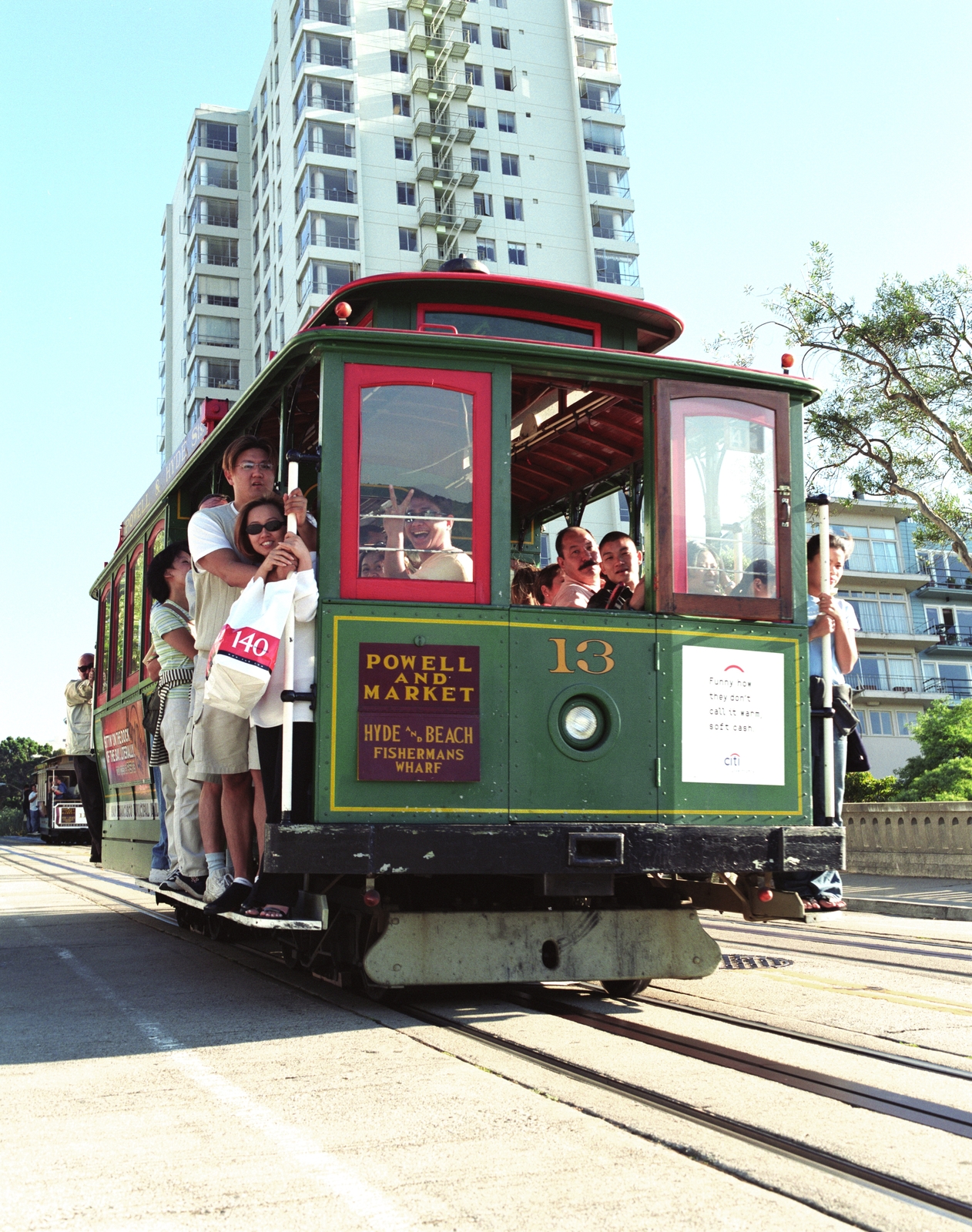 Alcatraz
For a spooky adventure, one can't think of a better place than Alcatraz to visit the ultimate infamous island haunted by the ghosts of ex-cons. The notorious former prison is located on an island of the same name in the middle of San Francisco Bay. Some of the United States' most notorious criminals were incarcerated there. The prison was closed in the 1960s and stories about Alcatraz are legendary. 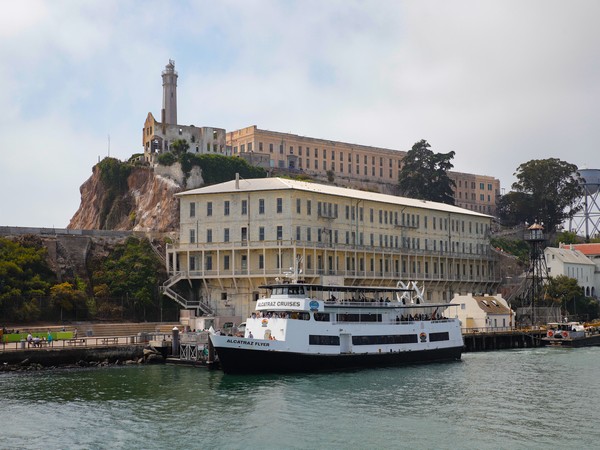 See the Sea Lions
PIER 39, is a shopping center and popular tourist attraction built on a pier in San Francisco. It's a festive waterfront marketplace that is one of the city's most popular attractions. A community of California sea lions has taken up residence on the docks in the PIER 39 Marina and visitors line the nearby railing to watch their antics.
From there, it's a short walk to some of the most favorite tourist attractions such as the San Francisco Dungeon and Madame Tussauds, the Museum of 3D Illusions, the Cartoon Art Museum, Ripley's Believe it or Not! Museum and many more. 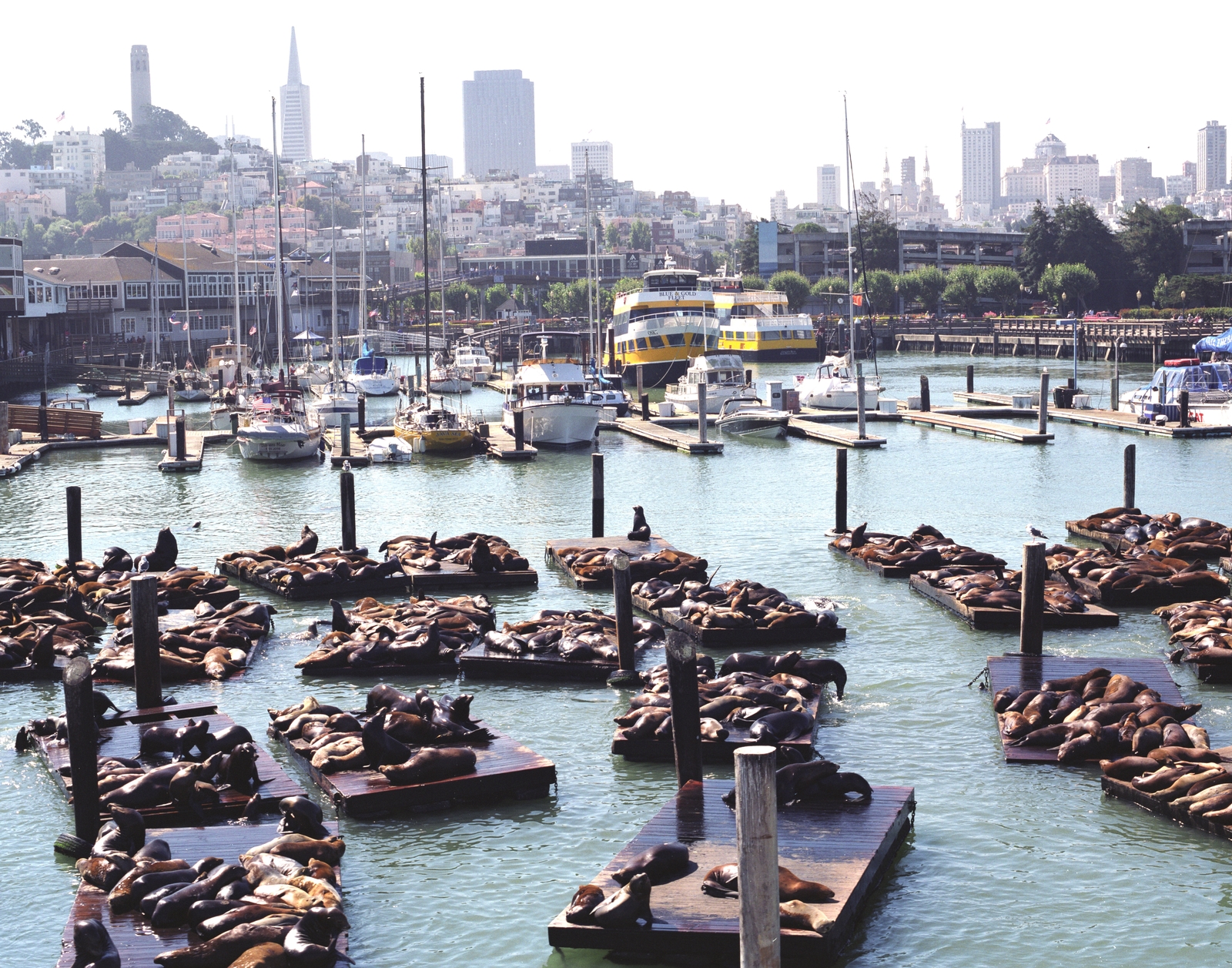 Go to an Outdoor Festival
Outdoor festivals have always been a popular San Francisco activity for people of all ages. The Yerba Buena Gardens Festival takes place during the summer months of May-October, hosting dining, shopping, and cultural activities for the whole family. The Stern Grove Festival, a San Francisco tradition since 1938, is a free outdoor music festival that has welcomed performers like The Doobie Brothers, Talib Kweli, and others. Visit Golden Gate Park for the Hardly Strictly Bluegrass music festival, which happens every October.

Meet the LGBTQ Community
Since San Francisco is widely known for its diversity, it is no surprise that Castro is a popular spot to explore. Its vibrant and lively atmosphere makes it a great destination to visit day and night. If you're in San Francisco in October, be sure to check out the annual Castro Street Fair. 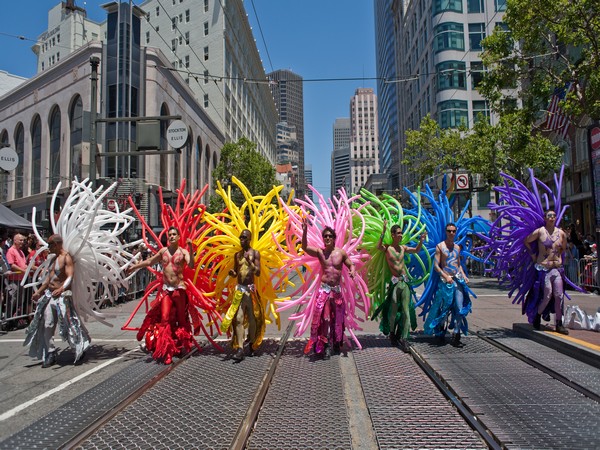 Sip at a local brewery or winery
Apart from visiting some iconic places, you will want to be in town for annual events like SF Beer Week. You also won't need to go to the wine country to enjoy a glass of wine. San Francisco has a handful of local wineries, including TANK18, The Press Club, and many others. 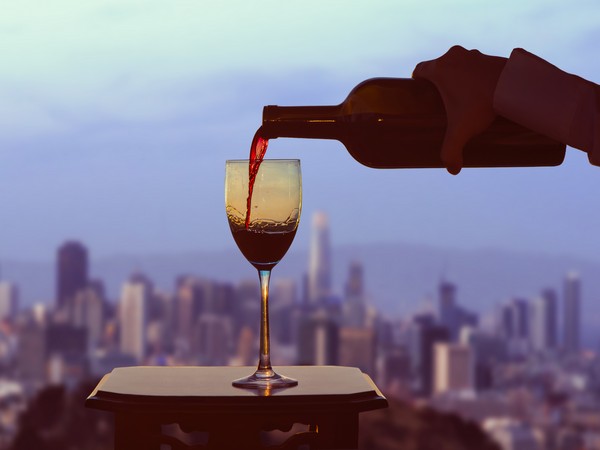 See Wildlife
Wildlife hopping is also one of the major attractions of San Francisco where you can easily take a nice boat ride around Stow Lake and locate birds of different species and turtles along the way. Places like the San Francisco Zoo & Gardens and Aquarium of the Bay are perfect for families with kids who are eager to see and interact with wildlife.
Marvel at San Francisco's Scenic Beauty
Discover San Francisco's beauty on the 49-mile scenic drive, which begins at City Hall and guides you to a number of popular historic and iconic landmarks. If you're up for a hike, the Presidio has a number of art trails that are worth the stunning views. Urban Hiker SF offers itineraries for group hikes through popular urban destinations like the Castro, Twin Peaks, Coit Tower, and many more.
Visit Famous Film and TV Locations
If you're a movie buff, these San Francisco locations are a must for your itinerary. The Fairmont, and the Palace of Fine Arts. Vertigo (1958), by Alfred Hitchcock, shot scenes at the Presidio and Fort Point, where Madeleine famously jumps into the bay. The Painted Ladies at Alamo Square is also a very familiar location for Full House fans!
Shop in Union Square
Union Square is the place for serious shoppers. Major department stores and the most exclusive designer boutiques line the streets. The Westfield San Francisco Shopping Centre houses the largest Bloomingdale's outside of New York and the second-largest Nordstrom in the U.S. 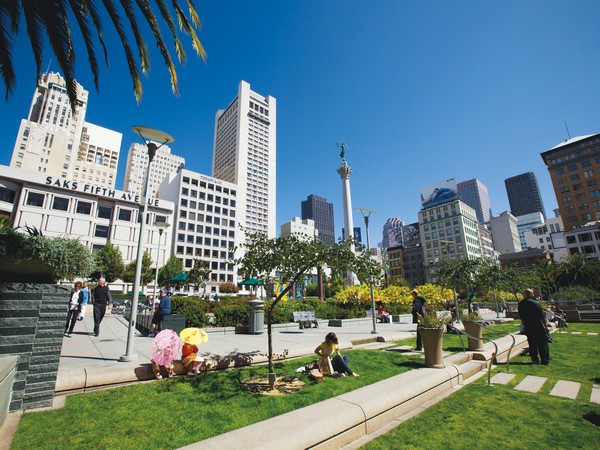 North Beach
North Beach, is surrounded by many Italian restaurants, though many other ethnic groups currently live in the neighborhood. It was also the historic center of the beatnik subculture and has become one of San Francisco's main nightlife districts as well as a residential neighborhood populated by a mix of young urban professionals, families, and Chinese immigrants. The beautiful Church of Saints Peter and Paul is a beloved landmark. 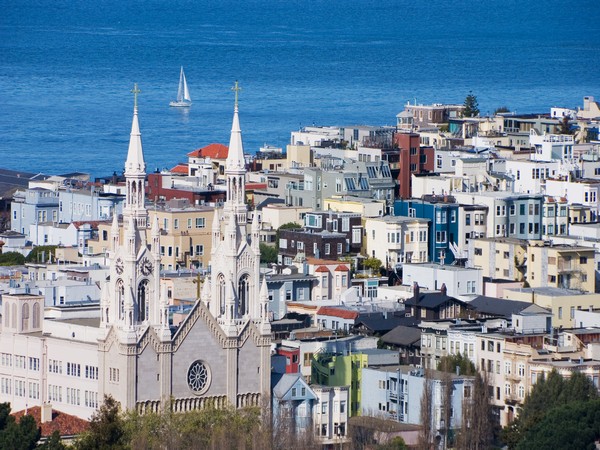 Explore Chinatown
This is the oldest Chinatown in North America and the largest Chinese enclave outside Asia. The entrance to the tourist destination at Grant Avenue and Bush Street is called the 'Dragon's Gate.' This city within a city is best explored on foot; exotic shops, renowned restaurants, food markets, temples, and small museums are all found within its boundaries. Visitors can buy ancient potions from herb shops, relax and enjoy a dim sum lunch or witness the making of fortune cookies.
Dine at World-Class Restaurants
Known for some of the best restaurants, San Francisco chefs excel at combining the freshest local ingredients, authentic international flavors and a touch of creative genius which will instigate your taste buds. Choose your cuisine: Chinese, Japanese, French, Italian and many more for a delectable taste. 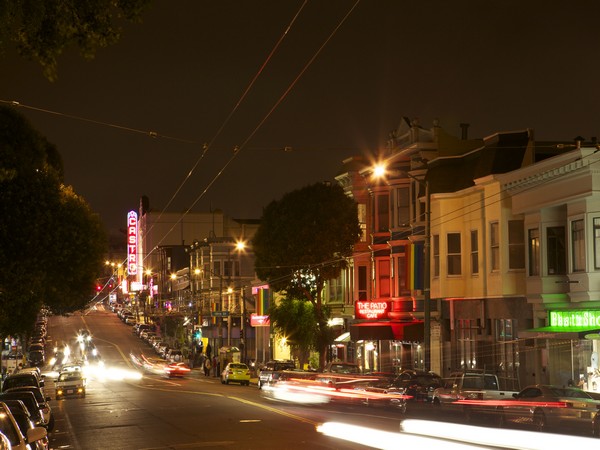 Celebrate the Nightlife
Nightlife in San Francisco is a constantly changing scene. From cocktails in Union Square to the ultimate club scene in SoMa, there are neighborhoods to experience all types of nightlife. For a different spin on nightlife, a number of museums host 21 and up events that invite visitors to sip and see special exhibits. (ANI)

Food Business Operators to get registered at the Food Safety department by December: Balbir Singh Sidhu